Part of our design philosophy is that art education can heal the soul. Today, we travel back to Renaissance Italy, also known as the golden age of goldsmithing.

Unlike previous decades, 16th century Europe witnessed a surge of appreciation for goldsmiths and jewellery was evolving to be than simple metalwork. Artists sought inspiration from the Ancient Greeks and Romans, deriving classical forms in sculpture for their works. The growing social demand for emotional design meant that more people had become eager to wear and gift jewellery for various motives, including personal displays of affluence, romantic tokens, reminders of human mortality, and religious devotion.

Bejewelled hands  wearing multiple rings had become a trend, as both men and women were known to enjoy signalling their wealth, status and business acumen in this way. Yet, less was more. Art historian Diana Sacrisbrick writes in Rings: Symbols of Wealth, Power and Affectio, just one or two rings bearing high-quality engraved gemstones were sufficient to show good taste. And, the concept of disegno reflected art and science increasingly coming together.

Relating to the general term ‘design’, back in Renaissance Italy, disegno conveyed the dual powers of intellectual and technical prowess in an artist. Considered a skillset that few artisans and creative professionals were able to achieve in practise, the word closely links with ingegno (from the Latin ingenium), and prominent thinkers of the time claimed these two as interconnected. The early Renaissance sculptor Lorenzo Ghiberti highlighted the importance of disegno as the basis of the major visual arts: painting, sculpture, and goldsmithing. Without imagination, skills on the purely technical front were in vain. But without knowing how to realise grand concepts by hand, one was also at a disadvantage. Thus, those who masterfully applied disegno into their patrons’ work greatly increased their status as the most coveted makers of luxurious items, especially goldsmiths. By conveying a message in the final design, metalwork became a prestigious symbol of displaying one’s virtue by taste, piety, or affection. 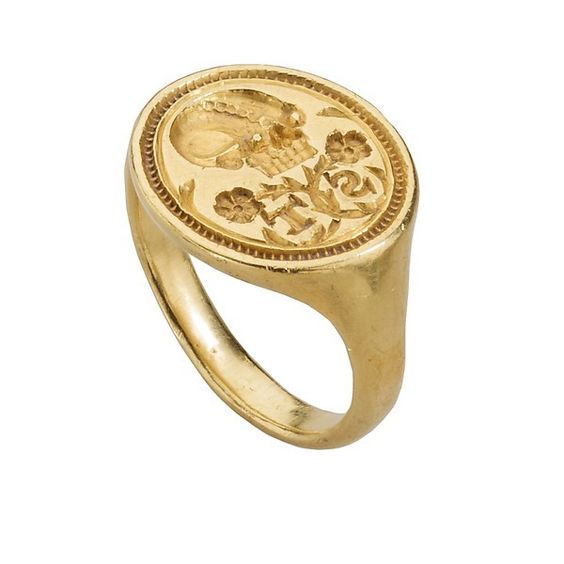 Rings were especially important symbols. As Pierre Woeiriot stated in his book Livre d'anneaux d'orfèvrerie (1561), Renaissance goldsmiths had both sculpting and painting skills that merged into a remarkable influence on other forms of art. Botticelli, for one, apprenticed as a goldsmith before he went on to be one of the greatest painting masters. Owning coveted gemstones was itself a status symbol, while getting one engraved by celebrated goldsmiths attested to the virtuous power of the patron. Familial honour  was of central importance in noble families which could be displayed through the virtuous gifting of gold signet rings across generations. Initials linked with flowers were another common motif in carvings, making them ideal gifts to lovers to ask for commitment.

Renaissance magical and scientific rings are another intriguing part of goldsmith history. According to popular belief that continued from earlier periods, gemstones had medicinal and spiritual qualities that the greatest rulers ascribed to daily wellbeing, including Philip II of Spain to Queen Elizabeth. Study of the natural sciences emerged with time-oriented designs. These miniature watches became firm favourites of European kings, perhaps for their indication of a forward-thinking head for their countries. More importantly, these manifested the rise of artistic and scientific endeavours to capture life's wonders.

However, to label a particular time as the most esteemed for goldsmiths is rather misleading. We see that today, creativity goes beyond technique, as audiences cherish the intentions and behind meanings too. The Neo-Renaissance phase in modern design was perhaps most telling, at a time when designers heavily referenced the intricate motifs and gilded surfaces so often seen in 16th century Italy. Signets, with their classical meanings and solid appearance, have endured to the contemporary trend of wearing one or even multiple pieces at once.

Ultimately for Renaissance goldsmiths, the mind and hands operating in harmony were their most powerful weapon. In appreciation for this fascinating age, and one of the main inspirations behind TVRRINI’s Regal Fantasy Collection, our designers see the incredible skill of goldsmiths who held mirrors up to nature for a living.

We wrote this article to share what we’ve been reading on design, history and recent culture. If you liked this content, do share it with someone who would appreciate it. You can also tag us with your thoughts in a comment or DM us on Instagram @tvrrini to spread the love.

Christus, Petrus. “A Goldsmith in His Shop.” Metmuseum.org, The Metropolitan Museum of Art.